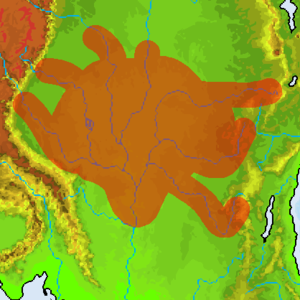 Succlythia at its greatest extent, around 7,200 Y

Hsuqlihta was an ancient civilization that existed in the modern-day Hsuqliht Basin in Central Delezia. It dominated much of the Yot River and built a series of complex canals to connect its various tributaries in the Hsuqliht Basin.

The Htaevic Empire took great influence from Hsuqliht culture, adopting concepts such as an octal number system as well as incorporating parts of the Hsuqliht religion, Herlucc.

Herlucc is the idea that humans are the only creatures that can discriminate good from bad, and that they have a responsibility to balance their life so that they can re-enter kanea. Kanea is the natural state of existence; it is the consciousness and fabric of reality that permeates the universe. Human consciousness is a disturbance in the kanea. When a human lives their life, they are trying to achieve a balance between good and bad. When humans die, their spirit attempts to re-enter the kanea. If the spirit is close enough to being neutral in morals (e.g. not too good nor bad), then the spirit merges once more with the kanea. If the spirit is too good, or too bad, then it is rejected from the kanea and must live another life on Pavala.

The Hsuqlihts were prominent architects and built many types of monuments.