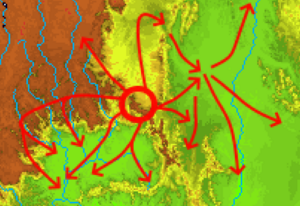 The Meó came from the Proto-Meó-Hsuqlihts, a people group who are theorised to have originated in the Yuniṅya mountain range, the mountain range that between the Yot and Htasei basins. The Proto-Meó-Hsuqlihts would later descend from the mountains into both basins, becoming the Meó-Laghuic peoples in the Htasei basin and surrounds, and the Hsuqlihtic peoples in the Yot basin, those that remained on the mountains also diversified into a few more peoples, such as the Ateyigaic and Puloatic peoples. Another branch migrated further north into the Khydean plateau , becoming the Aramakautic peoples, who would later largely assimilate into the Khydean culture, thus not much is known about them .

Descent into the Basin

In 5100 Y, after a slight expansion into the fringes of the surrounding river basins, the Proto-Meó-Hsuqliht language began to split into its primary branches; those that resided on the western fringes of the Yuniṅya mountains became the people speaking the Proto-Meó-Laghuic language. In 5800 they would further split into the Meóic languages in the more northern eastern Htasei basin (and the foothills of the mountains), and Laghuic in the southern mountain ranges. The Laghuic peoples would spread southwards to the coast, while the Meóic peoples ventured westward across the Htasei basin, overwhelming the native Konma population, who would assimilate to the dominant Meóic culture. The Meóic peoples would quickly go on to be the dominant culture throughout the entire Htasei basin and Miru river delta by 5950 Y

In the 6800s, the Raiwlawbiwmtë fled from their homeland due to displacement by the Htaevic people. Many would migrate to Unuvun, becoming the dominant population there, whilst others migrated to the southern reaches of Meó - becoming the Hkamisëbiwmtë people. They settled mainly on the coasts and in the mountainous regions of the south of the Htasei basin. Some kept their traditions, others completely assimilated, while most maintained a balance of both. They areas they settled were those that were inhabited by the Meó and the Laghuic peoples - all of which the Hkamisëbiwmtë intermarried & interacted with. The Hkamisëbiwmtë would go on to maintain relationships with Unuvun and play important diplomatic roles.

Under the Haki Republic

After the split of the Hsuqliht Empire in 7,224 Y, Emperor Lucclucc of the Southern Hsuqliht Empire declared himself the prophet of Luccluccism, stating that he had recieved divine right from the Elder Beings of Haki to conquer the entirety of Pavala in their name. He waged massive wars of conquest against the Meó, inhabitants of the Shattered Islands, the Northern Hsuqliht Empire and even parts of Nokhta, establishing the Haki Republic.

After an arduous 7 year campaign in the Htasei basin (due to difficulties with supply routes and the large mountainous barriers around it), the ancient Meó capital of Loṅvintà was finally captured and subdued by Emperor Lucclucc, and with King Makihau executed, the Htasei basin and Meó fell under the banner of the Haki Republic in 7256 Y.

The impact of the Haki Republic on Meó culture and society was enormous and permanently changed the region, bringing it from its former isolationist state to a region that for the rest of history would be deeply integrated with Htaevic and Hsuqliht society and customs. One of the most significant cultural impacts was the introduction of the Htaevic Hlunliw script, which had been adopted by the Hsuqliht and combined with some of their ancient mnemonic religious symbols, used to write in their language. Originally used for just Hsuqliht and Classical Htaevic writings, it was in the 7400s that the first Meó writings using the Hlunliw script appear, though these were scarce and of low prestige.

While the rest of the Haki Republic was in a general state of chaos due to the numerous civil wars, Meó remained relatively peaceful in this era, until the invasion of the Khydeans in 7570 Y, which lasted until 7667 Y. The Meó, sick of the oppressive Khydean rule, staged an uprising against the Khydean overlords sieging their imperial palace in 7659 Y. This led to a civil war lasting from 7659 Y-7667 Y, largely along ethnic lines of the Khydean elite and Meó commoners - several Htaevic states sent military support to the Meó cause. The end result of the war was a Meó victory and the decimation of the Khydean royal class, with almost all of them being deported to the Shattered Islands, mainly to Hydrolysis 2 Island, where they form an ethnic community of 20-50,000 today. The following period, up until the mid 8600's Meó's history closely followed that of the 1024 Year Spring, with a flourishing of culture and politics. Due to the civil war earlier, a sense of Meó nationalism began to arise.

Prince Vahketo [vɐx'ketu], establisher of the Kahla Dynasty, attempted to visit Prince Suakasui of Rvàshen in order to expand his diplomatic power to the south of the Malaeze Sea and attempt to increase the legitimacy to his claim of the Shattered Islands. Unfortunately, he achieved the exact opposite, by unknowingly eating the crown prince crab Azu. The irony of this was not lost on him, as Vahketo's own father had cannibalised in order to achieve his position on the throne of Meó. The result of this diplomatic skirmish was the start of a 9 years long war between Meó and the Unuvi princedoms, with millions of deaths. Meó also tries to take over the valley to the west or something.

The Discovery & Colonisation of the New World

Meó discovers the power of coal and fun things and suddenly transforms into the Sichuan basin.