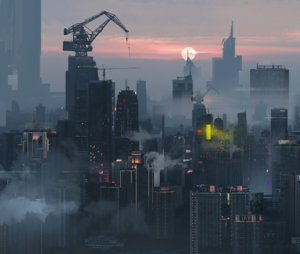 Yuuvei, officially the Metropolitan State of Yuune and Zhavei, is the capital and largest metropolitan region of the Nautical Peace with more than 59 million inhabitants. The metropolis is one of the oldest continuously inhabited cities on Pavala, with its most ancient buildings dating back to 7,000 Y. Located on the Imperial Plain, it is shielded from harsh circumpolar wind and water currents by the Steaming Mountains. Nevertheless, it experiences torrential amounts of rainfall during the year, earning it the nickname Petrichor City. The city has been the political center of Unuvun for many thousands of years, and has long dominated the economy, culture, and transportation around the island due to its central location.

The ward of Zhavei houses the imperial throne and parliament, while the imperial court is located in Ifa on the shore of the Pacific Lake. Also located on the Pacific Lake is Yuune, whose Lakeside Row has long been synonymous with Unuvunese banking. In recent decades, Lucky Cat has become the center of the Unuvunese tech sector thanks to the wealth of universities nearby. On the northern end of the metropolis, along the shore of the Midland Sea, lies the special city of Bitter Side which handles much of the sea trade of the metropolis, as well as being one of the Nautical Peace's major biotech centers.

One of the world's great tech hubs. Salaries here are sky high. Has its own maglev stop, and employees are rich enough to commute by it.

Unuvunese center of finance. Salaries even higher than in Lucky Cat, but power has gradually waned as technology continues to eat the world.

One of the oldest neighborhoods of Yuuvei; built around the famous waterfall.

Location of the Imperial Palace... has been gradually eroding alongside the Cataracts, but should still be inhabitable for several thousand years.

The Toad Road neighborhood of Central Ward is named after the famous Toad Road which the parliament, national museum, and many embassies sit on the sides of. As a result, Unuvunese senators are nicknamed "toads".

Referred to as a "colony of Nokhta", this district of Riverside ward is home to the largest Nokhtan population outside Ivinis.

Has a reputation for being one of the dirtiest parts of Yuuvei. Lots of illegal stuff going on here. Used to be pretty violent, but the metropolitan bureau of investigation obliterated all of the gangs after crime began leaking onto the subway and into richer neighborhoods.

Built around the southern canal. All the immigrants from the Yot River decided to come here for some reason. They brought their delicious cuisine with them, though. This was also where that little meteor hit and killed a few dozen people.

Built next to Little Yot, this area is home to Unuvun's largest concentration of ethnic Meó and Hkamisëbiwmtë, and one of the oldest Meó/Hkamisëbiwmtë diasporas on Pavala. It contains the ancient vacation home of Prince Nakètha, built in Meó's Sóutan era.

One of the major wards of Yuuvei. Near the airport. the best restaurants, and bakeries, living up to its name. Also has a plethora of musical instrument shops.

The Yuuvei spaceport is located on the Pacific Lake, and is connected to the city via maglev and high speed rail. It is well-known for its distinctive boarding bridges, which use LED bulbs to create pulses of light that move either in the direction of embarking or disembarking. This adds a sense of life to the spaceport that is visible from far away. The spaceport is also well-known for having one of the largest coffee courts in the world, with dozens of coffee shops and a gigantic common seating area. 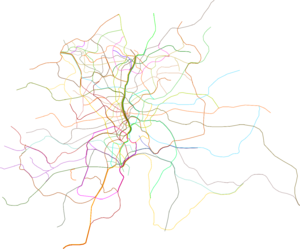