Hakiism is a widespread religion that was developed by Biplatzë Sagpawë and his followers during the 92nd century. It blamed the hard times of the preceding centuries in the Htaevic Rouge on the Elder Beings of Haki.

The idea behind Hakiism is that multiple astronomical "cycles" are bad. At the lowermost level, planets that orbit Yakei directly are said to have only one "cycle", rendering them Pure. Moons orbiting planets, or Pavala and Haki orbiting each other, are said to have two "cycles" and thus are impure. It is this impurity that created the Elder Beings of Haki, whose powerful gaze (represented in the occasional hurricanes that wander the surface of Haki) casts a bad omen over Pavala.

Other consequences of the Rule of Purity are that it is considered inauspicious whenever Evonir's moons are visible in the sky.

In The Haki Manifesto, the authors call for a rejection of the Elder Beings of Haki by means of a 'collective human migration as a species' to Ivinis, which lies beyond the terminator and is 'safe from Haki's haunting, wicked reflection of Yakei's holy and pure light rays through the Cosmic Ether'. In addition, the authors further suggest that God had placed humans on Pangaea in order to test their greed; if 'Man were as pure as God has hoped his Creations would be', they would all collectively agree to give up the valuable land of Delezia-Hazele and move to Ivinis to 'live simpler lives in confidence of having passed the Test of Faith and Morals'.

The authors even go as far as to suggest that all animals and plants be purged from Delezia-Hazele in order to 'leave the land barren and boring so that the Eye of Haki shall gaze upon nothing but the reflection of its innermost, deepest soul-less self'. 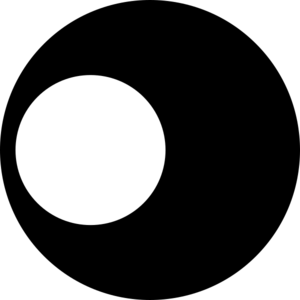 The symbol of Hakiism, shown on the right, is a circle with a smaller circle inside of it. The larger circle represents Pavala, while the smaller circle represents Ivinis. In this way, Ivinis is thought of as a "world within a world", protected by Pavala from "the unnatural, degenerate influence of Haki's eye" by "Pavala's mighty, supple and earthen flesh". Ironically, the symbol itself somewhat resembles an eye, a controversy that resulted in the creation of Hopelessism, a religion that believes both Pavala and Haki are corrupting influences and that one must wear shoes at all times, never sit on the ground, and pray for a speedy demise via asteroid impact from Sokata's Herd, among other things.

The Exiled Folk is a major sub-religion of Hakiism, and is the predominant religion in Betaliz. The Exiled Folk are bound by a pact of death to never venture beyond the terminator and see Haki with their own eyes. People who have been to Delezia-Hazele are viewed with distrust, and food and objects imported from those regions are considered tainted and special tea must be ingested afterwards in order to cleanse one's self. The Betaliz-Nautical Peace Agreement of 9,824 allows all Betaliz citizens to recieve a travel visa to Aahrus in order to visit the island of Lancha Jue, the closest landmass to the Antihaki Point and by extension the furthest landmass on Pavala from Haki.