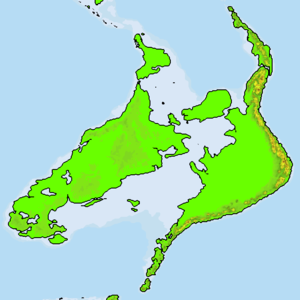 The continent of Ihyai lies southeast of Házélé in the Uqe ocean. It is composed primarily of two subcontinents, Lavaank and Seira, dozens of large, volcanic islands and hundreds of smaller islands which together constitute the Ihyai Archipelago

The name Ihyai comes from a mythological land in Unuvi mythology. Originally meant to represent the southeastern portion of Seira, it soon found use in describing the archipelago as a whole.

Embarking upon the Forbidden Currents, Ravishu sailed past the Cliffs of the Sea Lords, and through months of Stormy Seas until at last he arrived on the shores of Ihyai, a tranquil land inhabited by Gnomes and Headless Men. He was entranced by the saucy aroma of a cup-like flower, filled with the most pure, blue nectar, and upon taking a sip from the Htaltui he dropped onto his knees and proclaimed this Land the Paradise.

Ihyai was originally connected to Edeto, before a rift event separated the two regions. Ihyai drifted eastwards until encountering the Ryamji Plate, where it began accumulating terranes along its eastern coast, in present day Seira.

Ihyai is one of the most ethnically diverse continents on Pavala. The northeastern portions, in Seira, are mainly southern and eastern Amalthean having been primarily settled by the Soleani and the Auspik. The northwestern portion of Lavaank is composed primarily of Hac peoples. The central portions on both Lavaank and Seira are primarily settled by western Amalthean ethnic groups such as the Tana and the Kahákpi. Finally, the southern portions of both Lavaank and Seira are primarily Unuvi, having been colonized by the Nautical Peace.