There are lots of animals, food, and both on Pavala.

On Ivinis, six-legged egg-laying obis dominate the land. The jakeyl iviniking towers tens of meters above the ground, and various species of asolenvii roam the continent hunting for prey. Fierce tetrapod amphibians dominate the rivers and shallow waters, hunting any small terrestrial creature that wanders too close.

On Pangaea, the obis that rode via Nokhta were outcompeted by the existing paraves that had come to dominate the supercontinent. The protojihau split into the prokóvi, which would lead to kóvi, birds and kiyas, and the jihau, which split into the bipedal bijihau and the quadrupedal quadjihau.

2. Prokóvi are marked by the appearance of a postorbital fenestra.

3. Jihau are marked by the loss of their fourth toe.

Mammals are a much smaller group on Pavala than they are on Earth.

Crabbits have a cat-like facial structure with forward-facing eyes. However, they have large rabbit ears and large hind legs which allow them to hop towards their prey and make them locomote closer to how rabbits do. Their large ears are used as a mating signal and the larger the ear the more dominant the crabbit in its troupe. They are highly social and make barking noises. They have large claws but domesticated crabbits don't scratch and bite humans as much as cats do.

Blockheads are a diverse array of animals, ranging from the hammerhead lion, to the hammerhead cow, to the hammerhead monkey. The lot of them like to use their heads to joust, and have horns, scales, other sorts of wild decorations on it. The head is king for these animals. Got lots of different mating signals on it, like feathers sometimes too. Eyes usually spaced far apart on the head. This helps the carnivorous lot of them hunt, and the herbivorous lot of them see to their sides. Gives some extra room for the brain, too, since these guys don't got very compact brain matter (unlike birds and humans). A lot of them have trunks, some both long necks and trunks (like a weird hammerhead elephant giraffe, if your mind can hold that).

The samsui is a small amphibian found in the Unuvi marshes, with six legs. It is small, like a computer mouse, however it has a large, rotund rear supported by two pairs of hind legs that it uses to jump much like a frog. It generally has bog-like coloring with undecipherable patterns.

There is a larger, crocodile-like animal (by convergent evolution) except it has six legs and looks cuter.

The Human is a very intelligent animal capable of complex thought and emotion. As of the present day, humans dominate Pavala.

The kiya is the primary pack animal and mount of Pavala. Its carrying capacity and top speed are both somewhat less than the equivalent horse, however the kiya is considered to be one of the most intelligent and social animals on Pavala and can be extensively trained to carry out tasks on its own. Kiyas have been bred over thousands of years and have various derivatives maximized for strength, speed, endurance, et cetera with a diverse array of color patterns. A Kiya kind of looks like a Utahraptor except herbivorous. 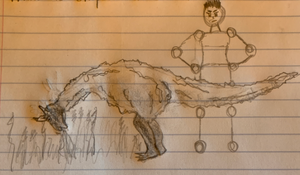 The knont (Unuvi: Hshila) is a two-legged creature, much like an orinthopod, with the milk production capabilities of a cow and the wool-growing capabilities of a sheep. They make a high pitched, croaking neigh from their long snouts and are not shy to spit on anything they find annoying. Underneath their massive cloud of wool is a lithe build which makes them generally unfit for meat cultivation compared to other domesticated animals. Their very ingrained herd mentality is augumented by their use of patterning in their wool to help identify members of social groups; their wool can have a wide range of both patterns and colors, but the quintessential knont has green-brown zebra-like stripes.

Being bipedal, knonts must bend over both to graze and to be milked. Their milk, is famed for its deliciously sweet, thick and creamy taste, though it is unsuitable to be refined into processed dairy products such as cheese because it does not easily separate. 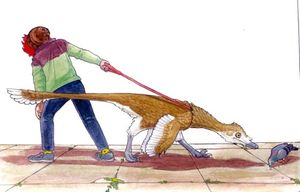 A pet kóvi being walked.

Kóvi are bird-like species of the clade Paraves, closely related to birds. They are slender paravians with long legs and large beaks. Kóvi are typically predatory carnivores, preying on smaller species of paravians and hexavians, while others are omnivorous and even herbivorous. Some species, like the Amalthean akhiluŋi, can be very intelligent, with a similar cognitive ability to dogs. As a result, some species are kept as pets. Most species are flightless.

The shirn is a six-legged beast that is around the scale of a cow, but flatter and laying closer to the ground. It has a long snout that it uses to graze, and the sound it makes is similar to that of a bassoon. It has a long tail which it uses for primitive social cues with other members of its herd. Shirns grow thin brown / black wooly coats which are difficult to shave off. They are most prized for their meat production.

Obis are an exceedingly diverse group of hexapods of the clade Obia. Obis include the largest living land animal, the 80-ton fihanobi, as well as some of the smallest land animals.

The Iviniking, with a maximum recorded weight of 95 tons and a maximum recorded length of 40 meters, was the largest known land animal species until the discovery of Gigantic King on Haki. They are endemic to southern Ivinis, inhabiting the coniferous forests that span the border between Nautical Ivinis, Rokhtaera and Linyen.

Asolenviis ('people eaters'), are a class of carnivorous obis that range in size from a small child to a T-Rex. Unlike most hexapods, asolenviis are bipedal. About half of all asolenviis have four arms used to more easily capture and devour their prey. In other asolenviis, the middle pair of arms have evolved a more wing-like structure utilized in complex mating rituals as well as for heat dissipation. Some of the most famous asolenvii species include the kiya killer, crazy blue and unuvi deluxe. Some asolenvii, such as the unuvi deluxe (also known as the 'epi'), are highly intelligent and have been domesticated over the past several thousand years.

The Robust Demon was a massive carnivorous asolenvii upwards of 11 meters long that went mysteriously extinct around 0 Y.

The island of Unuvun has been isolated in the southern Forbidden Sea ever since the Unuvi terrane first broke off of the ancient Ivinokhta continent some 60 million years ago. Since then, the asolenviis that existed on the island have thoroughly diversified and now include several very distinct orders of species, such as the epi and hyukei. 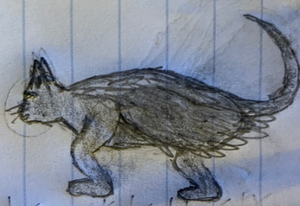 A feathercat in the wild

Hyukeis are separated from other asolenviis primarily by the evolution of thick fur coatings as well as a superficial resemblance to many mammals, with a cat-like facial structure as well as a reversion to four limbs. Unlike mammals, however, and like other asolenviis, hyukeis give birth via egg.

The domesticated feathercat, colloquially known simply as the feathercat, is a very social creature much like the domesticated dog. Thousands of years of breeding across Pavala have produced a diverse array of breeds, with feathercats coming in all sorts of shapes, sizes and flight capability.

Small breeds of feathercat-dog hybrids with a feathery tail running the length of their back. https://i.gyazo.com/9c86fee472deeab70e7818a2b06d16fd.png

The squird is a type of flightless quird which has many amphibious characteristics, having adapted to using its two sets of limbs as tentacles to propel itself underwater, and its set of vestigial wings as fins to help stabilize its swimming.

The tinmile class are a class of hexapods distinct from other classes by their mammal-like characteristics, including hair and giving live birth. They also contain tinmilary glands which secrete a substance analogous to that of milk for their offspring. Tinmiles are widespreaad throughout Delezia-Hazele but are absent from Ivinis, having originally evolved on Edeto and spread to the rest of Delezia-Hazele after Edeto's collision with the supercontinent. Many tinmiles, including the zonk and the loop eater are highly intelligent and exhibit characteristics similar to dolphins and elephants on Earth.

The loop eater (Unuvi: dumtui) primarily feasts on loops, a small type of bug common throughout Pavala. Their frontmost pair of legs have evolved to have long, ladle-like structures known as loop scoops on the end which they use in order to dig into the ground and locate loops to eat with their long snout. Their appearance is superficially similar to that of a wild boar, with large amounts of hair across their entire body. Loop eaters are generally passive animals but will use their loop scoops to defend themselves from predators if provoked, and several species have evolved to have sharp tips on the end of their loop scoops.

Loop eaters are very social animals and males will joust against each other with their loop scoops in a sort of pseudo-fencing match in order to claim mates. Some loop eaters have even been observed burying their dead relatives.

The zonk is a massive hexapod that could be mistaken for a dinosaur except it has fur and also there were never dinosaurs on Pavala. It has an extremely elongated neck like a giraffe which it uses to feast on the forest canopy. Zonks also have huge tusks which are prized throughout Pavala for their beauty. Edeto is famed for its long tradition of using war zonks in battle.

The Mako is a six legged cat, ranging in size from a small rabbit to a large rabbit. It has sharp canines with the ability to secrete venom, to kill and partially digest its prey. Its two front legs have the ability to produce a type of silk, it uses this to construct nets to catch its prey. The Mako is found mostly within the Meo Basin/Succlythia and neighbouring areas. It was domesticated in the Meo Basin and is a staple in the cultural iconography of the Meo people, where they are widely kept as agricultural helps to produce silk and eat pests, and also as domestic animals. The venom is not fatal to humans, although it may cause severe pain/illness to those that are allergic. Mako rarely bite humans, as they do not use their venom for defence. Antivenom is widely available, regardless.

Fishing cats are cats that have adapted to an semi-aquatic life style. They have webbed feet to help swim, and those that live near colder waters have thick fur like an otter. Their native range is throughout the Malaeze sea, and they live in both salt and freshwater, close to land, their range extends as far north as Aesanma. Some were domesticated by the Htaevic empire.

Hexphins are the hexapodal analogue of dolphins, and are widespread across Pavala's temperate waters. Unlike regular dolphins, hexphins generally have two sets of fins. They are highly social which makes them very well suited for dolphin racing. Though genetically distant from dolphins, convergent evolution has led to hexphins being considered a type of dolphin in popular culture.